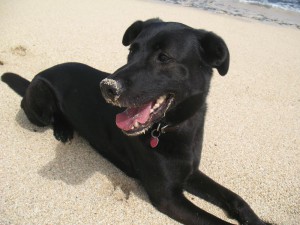 Wicket was a year old and had been at the shelter for six months. Her history was unknown. She had recently been spayed by a shelter “angel” hoping to make her more appealing for adoption. But not many people want a dog who constantly whines, barks, and literally bounces off the walls of her kennel.

But something about her “brand” of bounce made me offer her a tennis ball through the front of her kennel. She was captivated. Her eyes never left the ball. Out in the exercise yard I was impressed by her eagerness for the ball and how she problem-solved until she could possess it again. I told the shelter worker that I wanted to try her out for a career as a conservation detection dog. “That one?!” the worker asked, incredulous. “But, that one’s crazy!” 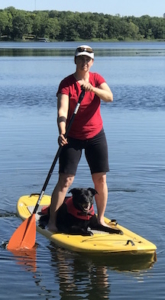 Turns out, she was the right kind of “crazy”. That was over 10 years ago. Wicket completed training blindingly fast and just a few months later she was working in the mountains west of Yellowstone National Park sniffing out scat of wolves and grizzly bears. After a career spent working in eight countries and 18 states and having learned to sniff out over 30 different scents – including plants, live endangered animals, live unwanted pests, and scats – this star of the Working Dogs for Conservation family is enjoying a well-earned “active retirement” with her long-time handler and best friend.